On the 396th day of March, 2020 (or March 31, 2021 for those who have returned to some semblance of normalcy), President Joe Biden outlined his vision for a new economy.  Specifically, President Biden focused on the American Jobs Plan as a $2.25 trillion investment in the United States that “will create millions of good  jobs, rebuilding our country’s infrastructure, and position the US to out-compete China.”

Ambitious climate policies are a major focus of the President’s vision for this massive infrastructure bill, which aims at rebuilding and developing both the US physical and technological infrastructure, creating jobs, and bolstering resilience.  The impact on the transportation sector will undoubtedly be substantial.

END_OF_DOCUMENT_TOKEN_TO_BE_REPLACED On March 31, 2021, President Biden officially unveiled the planned $2.25 trillion infrastructure bill, marking the beginning of what promises to be a lengthy debate over the appropriate size and scope of infrastructure investment and economic recovery in the country. Who better to guide you through it than our partner, Rodney Slater, former Secretary of Transportation in the Clinton Administration. Rodney appeared on Bloomberg TV and on Bloomberg’s SoundOn podcast to offer his insights. 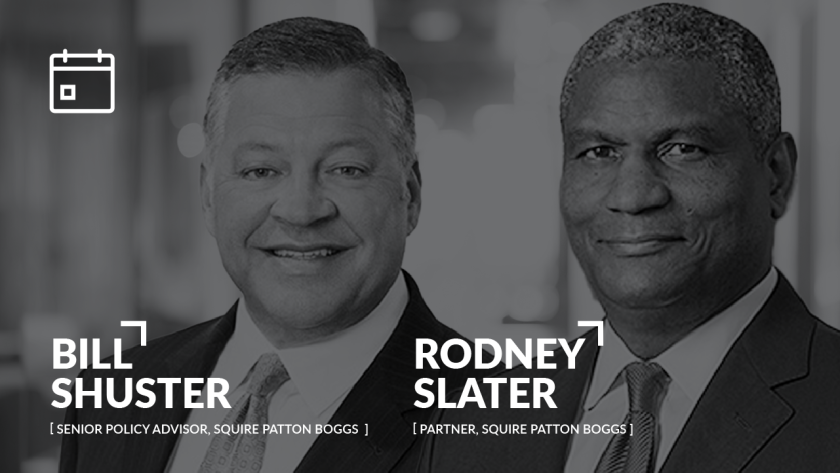 The conversation will happen next Monday, March 15, at 12:30 pm eastern. You can register for free (even if you are not a subscriber to The Bond Buyer, although you should probably fix that) by clicking the link here.

As the likelihood that Congress will pass infrastructure legislation with tax-advantaged bond provisions appears greater than it has in many years, this conversation is one you won’t want to miss.

We’ll have much more to say about that topic as the legislative text crystallizes over the coming months.

(And, as always, we exhort you to Live Every Week Like It’s Infrastructure Week.) Our own Mike Cullers was quoted in Law360 on Wednesday in an article about renewed hope for a full restoration of tax-exempt advance refundings of tax-advantaged bonds after their repeal by the TCJA. The article describes the renewed optimism in the muni bond community that tax-exempt advance refundings can be restored, precipitated by the confirmation of Mayor Pete as Transportation Secretary.

As you have probably seen by now, Mr. Buttigieg made clear in his Senate confirmation hearing that he, like Brother Cullers, is a man of refined taste who appreciates the great pleasures of life (fine scotch, advance refundings for debt service savings, etc.). (Other similarities: neither man is a cat.)

END_OF_DOCUMENT_TOKEN_TO_BE_REPLACED Remember back in the day when we would all gather for a transaction closing to get documents signed and enjoy a nice meal out at a restaurant together? Me neither. In fact, in-person closings were starting to fade long before the pandemic.

Now that we have been closing transactions from the comfort [sic] of our homes for almost a year, in-person closings may become extinct altogether. With that comes the complicated logistics of getting documents signed, shipped, and overnighted to the respective parties where electronic signatures cannot, for one reason or another, be used. Electronic signatures have saved transaction closings during the pandemic, but specific IRS forms, such as the family of Form 8038s, still required a wet signature.

END_OF_DOCUMENT_TOKEN_TO_BE_REPLACED On January 27, 2021, a snowy owl was seen in New York City’s Central Park for the first time in 130 years.  Nine days later, on February 5, 2021, something almost as rare occurred – the Internal Revenue Service released a private letter ruling dealing with Section 103 of the Internal Revenue Code.[1]  In PLR 202105007, the IRS determined that a nonprofit corporation that amended its articles of incorporation to change its purposes and come under the control of a city became a “constituted authority,” within the meaning of Treas. Reg. 1.103-1(b), of the city that could issue tax-exempt bonds on behalf of the city.

The coincidence of these infrequent events involving ornithology and quasi-governmental entities calls to mind the field guide Johnny Hutchinson prepared on the tax classifications of various species of the latter, which was an homage to Roger Tory Peterson’s Field Guide to Birds, a seminal work in the canon of the former.  February is a good time to brush up on both.

In a complaint filed directly with the U.S. Supreme Court under its original jurisdiction,[1] New Hampshire has sued Massachusetts for attempting to tax residents of the Granite State who normally work in Massachusetts but are working at home during the pandemic. Read Mike’s comments on the case in The Bond Buyer here ($).

Information on the case from the New Hampshire Governor’s Office.

Principality of Monaco v. Mississippi, 292 U.S. 313 (1934) (holding, and unjustly depriving us of a monumental spectacle, that Monaco couldn’t sue Mississippi in the Supreme Court without Mississippi’s  consent to enforce pre-Civil War bonds issued by various Mississippi entities, which had been in default for around 90 years, and which had been donated to the Monaco consulate in Paris by certain unknown troublemakers who “had been advised that there was no basis upon which they could maintain a suit against Mississippi on the bonds, but that ‘such a suit could only be maintained by a foreign government or one of the United States’”). The IRS has had a busy start to 2021! Guidance continues to pour forth as the change in Administration approaches. On January 4, the IRS released Revenue Procedure 2021-10, which provides issuers with updated procedures for obtaining review from the IRS Office of Appeals of proposed adverse determinations and rebate refund rejections by the IRS Office of Tax-Exempt Bonds. Rev. Proc. 2021-10 supplements and supersedes Rev. Proc. 2006-40, which previously set forth the procedures for getting to Appeals. Rev. Proc. 2006-40 predated the advent of tax credit and direct pay bonds, and therefore applied only to tax-exempt bonds. As many of you may have experienced, the IRS has applied the logic of Rev. Proc. 2006-40 to tax-advantaged bonds that were not tax-exempt bonds (e.g., BABs) in audits of those bonds.  Rev. Proc. 2021-10 adopts this practice.

END_OF_DOCUMENT_TOKEN_TO_BE_REPLACED

We just wanted to remind everyone that today, December 16, 2020 at 4:00 pm Eastern Squire Patton Boggs’ and the Association of Public Finance Professionals (APFP) of the District of Columbia, Maryland, and Virginia are hosting a virtual event to remember!  The event will feature insights from our colleagues, former Congressman Joe Crowley (D-NY), former Congressman and former Chairman of the House Committee on Transportation and Infrastructure Bill Shuster (R-PA), and former Secretary of Transportation Rodney Slater regarding what Joe Biden’s infrastructure “Build Back Better” plan will include.

Click here to register!  We hope to see you there!

We can all agree that the year 2020 has been incredibly polarizing.  Never have the authors of this blog fought with family members over politics, what to do or not do during the COVID-19 outbreak, and who should or should not be invited to Christmas Eve dinner more than we have this year.  However, one thing that all Public Finance professionals can agree on is that this country’s infrastructure plan is vital to our industry.

A lot of our industry is curious about what Joe Biden’s infrastructure “Build Back Better” plan will include.  He plans to launch “a national effort aimed at creating the jobs we need to build a modern, sustainable infrastructure now and deliver an equitable clean energy future.”